GreenCape have established a drought business support page. They hope to help businesses adjust to the “New Normal” of water scarcity and have therefore mapped out the Sustainable Water Use Journey and proposed actions for each step …

“Membership is open to all the property owners within the Blackheath CID footprint who are encouraged to apply for membership, so that they may exercise their right to influence the business of the Blackheath CID. …

GreenCape members interested in exporting or who are already exporting may be interested in this opportunity to join the Mayor to the IzmirInternational Fair, offered by the City and Wesgro.   WESGRO and the office …

Dear Members We are writing to you to request your participation in our Annual Survey to Property Owners in Blackheath Industria. The questionnaire is a very brief document that will only take about 5 minutes to … 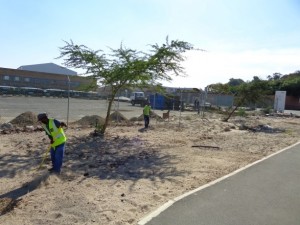 The Blackheath CID cleansing team had a very productive month and succeeded in sweeping, mowing and getting rid of weeds and other alien vegetation throughout the area. Their next task is to tidy up the whole of Range Road and to especially look at verge levelling.

The Blackheath Industrial Area is slowly but surely improving and all the hard work of the past is slowly but surely paying off. Looking at the maintenance that is being done, road works that are taking place right through the area and also various other projects, we are proud of the ongoing progress and upgrades to the local infrastructure.

Verge upgrades are still on-going in the area with Shar Civils still busy with the NMT lane projects and pushing hard to finish up at the end of May. Range Road is in its final stages and there is still a lot of work that needs to be done in School Road.

Essential stormwater and other infrastructure upgrades are being rolled out throughout these locations. The City’s Safety and Security Directorate is extending its informant reward system to clamp down on illegal dumping, which costs the City an estimated R350 million annually. _ 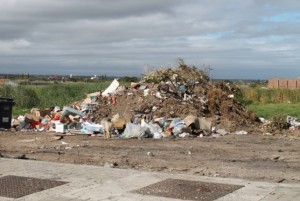 The City of Cape Town is incorporating its informant reward system into the fight against illegal dumping. A policy relating to rewards was adopted by the City in 2014 in an effort to improve policing services, with the Safety and Security Directorate introducing a reward system for members of the public who provide information that will lead to a positive outcome against criminal activity.

Illegal dumping places an enormous burden on the City’s resources and ability to deliver services to residents as it costs an estimated R350 million a year to deal with the issue, as highlighted by Mayor De Lille at the launch of the illegal dumping campaign in February (see more here: Illegal Dumping)

‘We have had some success in tracking down those responsible for illegally dumping garden and building refuse, but I believe that there are still far too many perpetrators who are getting away with it. That is why we are highlighting our informant reward system to hopefully spur people on to speak up against this flagrant disregard for the law and the destruction of our environment,’ said the City’s Mayoral Committee Member for Safety and Security, Alderman JP Smith.

The informant reward policy allows for payments of up to R1 000 for information leading to an arrest or fine being issued for illegal dumping. Informants would be required to submit as much evidence as possible, including sworn affidavits, photographs or video footage as well as clear identification of vehicles and/or persons involved.

Witnesses are only required to testify in court where the suspects contest the matter and opt for a trial instead of paying an admission of guilt fine.
“Ideally, we would want residents to provide information and witness accounts against criminals because it is the right thing to do. However, I am under no illusion that many people simply turn a blind eye because they do not want to get involved, are apathetic, or don’t know that we are losing more than a quarter of a billion rand a year cleaning up after culprits when we could be spending that money on other, more crucial services. We are hoping that the reward system will result in more people coming forward with useful information,” added Alderman Smith.

There are more than 1 000 large dumping hotspots across the city – some are popular for the dumping of household waste, while others are commonly used for the dumping of building rubble. In one of the most recent incidents, a man was caught red-handed, dumping thousands of tablets in Philippi (see more here: Illegal dumping).
Members of the public can report illegal dumping to the City’s call centre on 0860 103 089.

New business to the Area

Unlike any other sign company they have the engineering insight and capability to ensure all their work is executed with the end user in mind. They also produce project boards, computer cut vinyl signs, vinyl print signs, magnetic signs, building signs, vehicle signs, banners and safety symbolic signs.

As a small business they see an opportunity to support our government’s drive for job creation and skills development to address unemployment and therefore seek to employ and train persons who wish to develop themselves.

Their specific goal in this regard is to create fulltime employment opportunities in an economically sustainable environment. 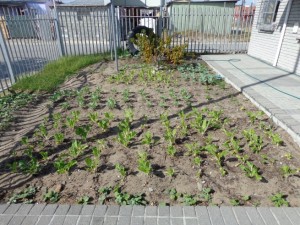 Both ECD centres are doing exceptionally well. Both the Happy Feet Crèche and Apilayo Amanzi Grade “R” Schools have full classes and work through a tight educational programme every day.

The teachers are doing their best to educate the children of the community. Both Schools are working with a full daily programme and ensure that kids are well looked after. The Happy Feet Crèche is currently full and also have children on their waiting list.

The Apilayo Amanzi Grade “R” School is currently busy with various projects such as gardening to provide the children with fresh vegetables and also running a daily connect group for the seniors of the community.

Please support the schools by donating any stationery or educational items?

Welcome to the November edition of the Blackheath City Improvement District Newsletter.

Much has transpired since the initial start of the Blackheath Non-motorised Transport (NMT) project.  We are addressing our own “injustices of the past” in Blackheath by bringing the infrastructure up to an acceptable level.  Addressing drainage and infrastructure in general whilst adding NMT lanes to ensure comfortable and safe pedestrian routes.  All this has not been without the challenges brought by the construction phase and the BCID staff have consistently noted and highlighted concerns during the development phase.

We believe that by the end of March most of the infrastructure upgrades will be complete and that the Blackheath Industrial Area would have taken another large step into the 21st Century, but also a very large “step up” to compete with other Industrial Areas in attracting the high end and more responsible property owners and tenants.  This will ensure that we can continue to uplift the area and the local property prices whilst attracting the right kind of tenant and end user, as well as visitors to the area that will promote the economy and longevity of this improvement.

We therefore remain “committed to making a difference.”

Since last year we have been struggling with the Provincial Government to clear the public open space along Wimbledon Road and just did not see the danger in the trees blocking visibility on public open space.  ST3 Security, our Security provider of visible Security patrols within the public open space, brought it to our attention that criminals are making use of the bush to rob pedestrians and escape after robberies.  The failure by the Provincial Department of Transport and Public Works led us to cut down the alien vegetation in order to reduce the risk of crime. With the help of residents from Happy Valley and BCID staff we manage to clear the whole area in 5 days.

Shar Civils, being the contractor on the Non-motorised Transport (NMT) lanes project, is making good progress and will be completing the entire area NMT project around the end of March 2015.  The contractor is currently busy with the section that stretches from the Blackheath Station until the Stellenbosch Arterial Road.  The intersection at the four-way stop will be paved and NMT lanes will only be on the left-hand side.

Over the festive season the children of Happy Valley community manage to destroy and vandalised Happy Feet Crèche, the community hall was ripped apart, toilets been damaged and criminals managed to get in the crèche but did not steal anything.

We ask business owners to please assist in any way possible, as currently the Crèche have no water connection to the toilets and as you can see all the toilets been vandalised.

Happy Feet Crèche started the year off with only a hand full of kids, however, numbers show that they may have up to 65 children enrolling at the school this year.  Last year the Happy Feet Crèche closed its doors with a full class room and we believe they will continue with this trend this year. Aphilayo Amanzi kick started their year with a full class room of 50 children and still have a few on their waiting list. This Grade “R” School also planted their own vegetable garden and are now at the point where they can provide the children with fresh vegetables.

Please see the following tips and precautions to take, this will help to minimise damages to your property and contents during this time.

Backup batteries for fences and gates: To ensure that electric fencing and gates still work during a blackout, it is imperative that backup batteries are installed and maintained.

Unplug your appliances: In the event that the power goes out, it is a good idea to unplug any appliance or electronic device that may be vulnerable to the power surges when the electricity comes back on, consumers can take steps to help reduce the chances of any damage from occurring.

Secure your home: In the event that the power goes out, homeowners are advised to ensure that their homes are locked up and adequately secured, in order to reduce the risk of a home burglary. “Insurance companies will assess any home burglary claims to determine whether or not the policyholder regularly secured their home and activated their alarms whenever they went out.”

Fire risks: Many consumers will use candles and other forms of devices to light up their homes during the load shedding periods in the evenings. Please be extra vigilant when using anything that has an increased fire hazard risk. “Homeowners are encouraged to have a fire extinguisher in their homes should a fire break out.”

Be alert: Criminals use load shedding as the opportune time to undertake illegal activities. “Homeowners need to be extra alert during this time, particularly when arriving or leaving the home in the evenings. Keep a torch in your car should you arrive home in the dark and need to open your perimeter security gate manually.”